In Pieces Falling: navigating 9/11 with faith, family and the FDNY I shared how it all started:

“That fall, I received information about a volunteer opportunity that piqued my interest. The September 11 Families Association was looking for docents to share their September 11 stories. To be honest I had never heard the word docent before, so I looked it up in the dictionary. It means museum guide.

Even though I was apprehensive, I decided to give volunteering a try.

I called to find out more information.

“You need to come in for an interview, and then there is a training session.” said Rachel, the docent coordinator.

I wasn’t sure if my lack of knowledge about the World Trade Center would be a problem or not. I had only been to the WTC twice in my entire life. Once in my late teens I had taken the PATH train into the WTC, and on July 4,1976, Bruce and I visited the observation deck of Two WTC with his sister and husband.

I also felt I barely knew anything about September 11, 2001, besides my own story.

What was I thinking?

Actually, I knew exactly what I was thinking. The 9/11 Tribute Center’s mission was “person to person” history. I knew I could tell Bruce’s and my story. I had done that in churches and at ladies’ groups. This was a whole new thing, but I wanted to try.

A few weeks after the interview, I headed back into Lower Manhattan for a two-day training workshop. As I drove to the training, I felt like this could be a mistake.

Lord, I am willing to try this, but I need a sign or something. Please.

As I timidly entered the room, I scanned faces looking for Rachel, the only person I had met before. Wait! That’s Bruce’s captain from Squad 41. Someone I know. A nod from God.

Lee Ielpi, the founder of 9/11 Tribute Center, shared his story and vision. “I’m retired Fire Department. My son Jonathan was killed on 9/11. I had spoken to him early on September 11 as he was heading to his firehouse. Eventually I would head to the site to look for him.”

Lee shared about the band of dads—a group of retired firefighters who searched for their firefighter sons—and of finding Jonathan’s body in early December 2001. His story was powerful.

Lee went on to state his reason for starting Tribute—to tell the stories. When he had visited the site in recent months, he had noticed many tourists and random people sharing misinformation and incorrect facts about the attacks. He wondered what could happen if the people who had first–hand information had the opportunity to share their perspective. And the 9/11 Tribute Center was born.

The training was proceeding nicely when a staff member mentioned that the volunteers shouldn’t get political. That’s not a problem.

Then a fellow trainee added, “You shouldn’t get too religious either.” That could be a problem.”

I thought about the night I spent in the hotel near Meghan’s college, when I wept with gratitude at God’s protection over my daughters despite all that we had lost. I thought about Emily’s wedding, and how God made ways in all our lives when there appeared to be no way.

I tentatively raised my hand. “If we aren’t allowed to mention God, I will respect that, but to tell my story I need to mention God because God is a big part of my story.”

Rachel said, “If God is your story, you can mention God.” Another big nod from God.

Sixteen years later, I still have vivid memories of that training session. I was so nervous. It felt like I was running with the big kids and that feeling happened time and time again as numerous opportunities came my way. As I have pondered those experiences over the last few days I am awed. Simply awed. Leading walking tours, speaking to school groups, representing Tribute at various events has been a priceless gift. But by far the greatest gift has been the people I have met. Whether it was only for the hour or so we spent together on a tour or in an education program or the moments we chatted before or after a tour or the amazing TLA adventures, I am changed because we shared that time. 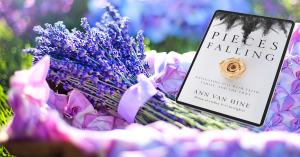